Buhari traveled to London and Oshiomhole said this…

Editor November 5, 2019 News Comments Off on Buhari traveled to London and Oshiomhole said this… 8 Views

Mushin plank market, 4 other buildings ravaged by fire in Lagos 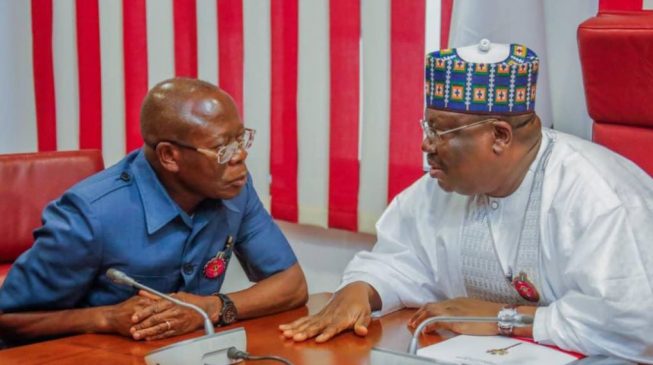 The National Chairman of the All Progressives Congress  (APC) Adams Oshiomhole,said that  President Muhammadu Buhari is governing Nigeria from wherever he is.

The president is currently on a private visit to the United Kingdom.

During a visit to Senate President Ahmad Lawan at the National Assembly on Tuesday, the APC chairman said wherever the national interest is involved, the president is on duty.

He said: “I think by signing into law at the Nigerian House in London, it shows that wherever the president is, he is presiding over Nigeria and with the benefit of modern technology we have passed the Mungo Park era.

“So signing it in London for me has also made several statements – namely, that wherever national interest is involved, the president is on duty and wherever he is he is presiding.

“I also salute his assenting to the bill as fast as he did and even at the Nigerian House in London.”

Oshiomhole spoke on  the signing of the production sharing contract (PSC) amendment bill by the president.

Buhari signed the bill at the Abuja House in London on Monday; a development that has elicited criticism with many saying Vice-President Yemi Osinbajo could have performed the function in his stead.

The APC chairman also commended to the opposition parties in the upper legislative chamber for the role they played in passing the bill.

On his part, Lawan said the current senate is working hard to ensure that Nigerians have good governance.

“It may interest you to know that Nigeria receives $268million only before this amendment. After the amendment when the bill will start to operate, at $55 to a barrel, Nigeria will receive about $1.5billion,” he said.

“Going up to $60 (per barrel) it be close to $2billion. That is a monumental quantum leap actually.